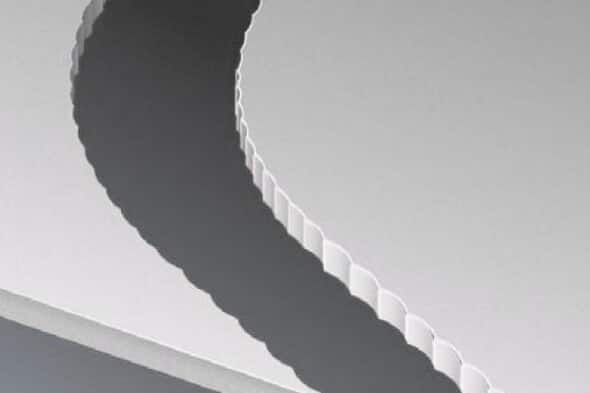 The marks made by the individual strokes of the machine remain visible on the nibbled edge. Moving your finger along the edge, you can feel the uneven surface. The more that holes overlap, the smoother the edge is. A greater degree of overlap, however, also means that more hits have to be executed by the punch press.

Sheet metal nibbling is not used to produce straight edges, especially visible ones. Instead, slotting is the preferred method for this work. Slotting produces an edge that is finer than a nibbled edge and just as smooth as a laser-cut edge. The punch for slotting has a long, narrow, rectangular shape with a beveled cutting surface.

At sheet metal slotting, the punch strikes the sheet and returns to the top of the stroke without cutting the scrap off. The second hit is being executed slightly offset from first, third offset from second and so on. This way, continuous cut is made. A large portion of the punched edge is actually cut, and there are none of the grooves, typical for nibbling, marking the beginning of a hit. Instead of punching out separate slugs, the machine cuts a continuous strip. The strip gradually curls up as we carry on cutting and is separated from the sheet with last punch.
However, the long, continuous strip created during the cutting process has one problem: it limits both the length of the cut and the sheet thickness.

In order to avoid this limitations, a new cutting method – multishearing – was developed. In this technique, first step is very same as at sheet metal slotting. But the second stroke of shearing is also used to separate the strip from the metal sheet. Hence, small portion of the strip is always left to ensure smooth, continuous cut. Slotting and multishear techniques give us a higher-quality cuts and edges as sheet metal nibbling itself, but both techniques have their own limitations as well. Both methods can be used only for straight contours. On the other hand, techniques are particularly well suited for parts sharing a common cut.

Does our mission seem interesting to you? Become a part of our vision!

Optimize your production costs. Work with us!

What do you gain if you choose to cooperate with a reliable Slovenian company for sheet metal forming?